The Fall of 2017 and now into the Winter of 2018 has seen a good round of happenings on the farm.

Luckily we’ve been able to get a few important things completed before the arctic temperatures set in. 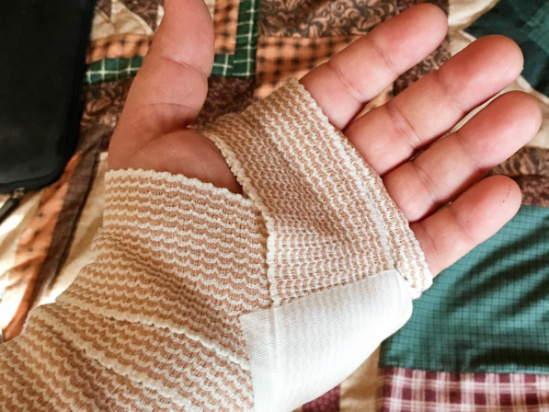 With the associated downtime of the late Fall market season, I thought it was time to get this surgery accomplished.

Getting worse over about a year’s time, my fingers were getting numb doing routine tasks.

Whether it was driving my truck, reading a book or chopping onions, my hands were getting all tingly.

I was even dropping tools and such accidentally.

Luckily the operation has come a long way.

I had a super surgeon, Dr. Matarrese at CVPH working her magic.

I think the total time of the actual surgery was 8 minutes and thanks to the Affordable Care Act (~Obamacare), it was covered with a small co-pay.

She had prescribed a few painkillers if needed, but just Tylenol and Advil was all that I ever needed to soothe any discomfort.

Before my operation, typing on my Chromebook would result in severe tightness and tingling feelings, and now the numbness in my hands is totally gone.

It was good to get this done during the downtime as Kimmy had to bake a few markets by herself and I was pretty useless while I healed.

We took off the old garage doors and eventually had them covered and closed up with clapboard siding.

We didn’t need those doors anymore and instead we now make use of the wall space on the inside. 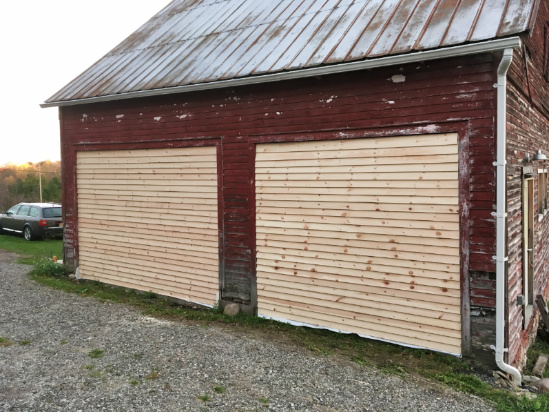 Usually I “pine” for the rough sawn varieties, this time I opted for some kiln-dried and planed 1″ x 6″ boards from Ward Lumber.

I did save some money buying rough sawn boards and then drying and planing them myself, but overall it took a bunch of time. 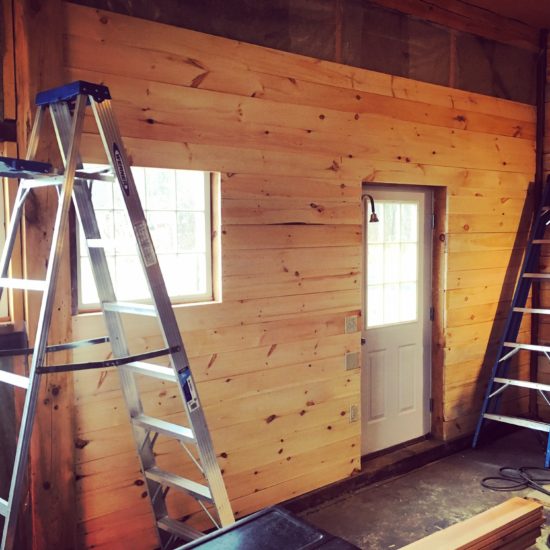 These went up quick and they look nice.

Plus I know there won’t be much shrinkage between rows leaving big gaps if they had to dry more.

I sit on the board of Cornell Cooperative Extension Essex County and it also happens that our current VP is also an engineer!

Mark came over on a sunny autumn day, shovel in hand, ready to inspect my silty clay loam soils.

With our septic perc test done, Mark was then able to draw up the schematics and requirements for a completely new septic system. 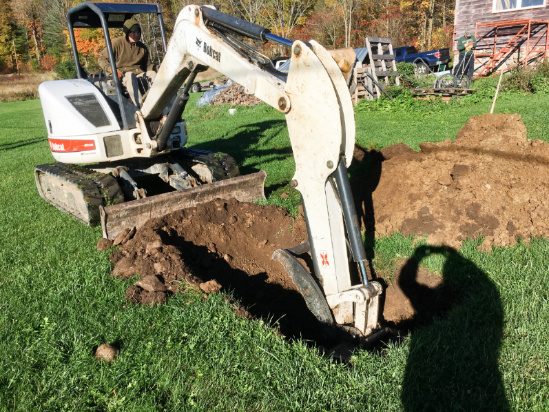 That was all good.

The bad news (sort of, not really) is that with all the clay we have, we’ll need about 2 feet of sand brought in for the leach field.

This increases the cost a bit more than what we planned / budgeted for.

Therefore we have to wait until later this year when we’re flush with funds from this summer’s bountiful farmer’s markets.

A wood crib of some sort was a project high on my list.

I’ve been gathering firewood for about 2 years, some of it I receive as a barter for hay.

I’ve spent many dollars and frustrating hours replacing and rearranging tarps over a wood pile and never truly happy with the final result.

Living in the sometimes windy vale of Willsboro made the job border on insanity running around securing loose flappy corners.

We built two of these wood sheds over a stretch of two days taking about 4 hours each with some help from my buddy Chase Pierce. 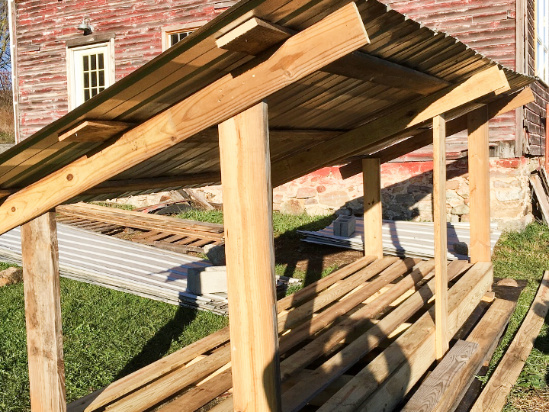 I’ll have a how-to post soon on how we built it.

So far with a bunch of rain and snow, it has held up well and is keeping my wood nice and dry. 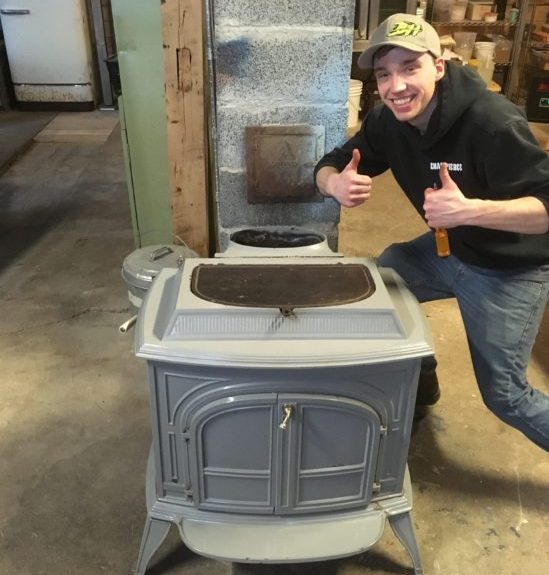 Chase also rode with me to Morrisonville to pick up and lug into place this used Vermont Castings beauty i got on Craigslist.

We had initially requested a quote for getting a Fujitsu Cold Temp Heat Pump as we’d seen them everywhere in Europe and Scandinavia.

This Vigilant is old but the enamel and cast iron is in great working shape.

For $250, it’s a wonderful heater for all that dry firewood I now have!

My friends Adam and Elisha helped us tremendously getting this 4′ by 6′ heavy window into place in the Breadery.

My initial hole had to be trimmed ever wider after a few failed attempts to nestle the window nicely into the building.

It adds so much more natural light to the space.

This is the twin window to the one we have in the tiny house.

Both of the windows I got for free as they were salvaged from a lakefront residence remodel. 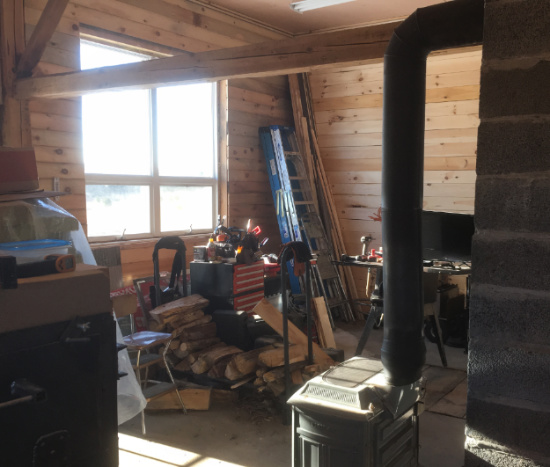 My father-in-law helped us out with putting in a new back door as well with plans for that to open up onto a deck at some point later this summer.

It’s all really coming together and starting to look like a legit Breadery.

One big project looms heavy in my heart: the Barn.

If I can get more of the void patched up, I will sleep easier, especially as the wind picks up this Winter.

A good chunk of the work requires a 40 foot lift, but I think there are some things I can do without that piece of equipment.

In the short term I have a plan that uses ladders, some scaffolding and 2″ x 6″ rough sawn boards cut into shorter, manageable lengths making them easier to lift into place at higher elevations.

Anyway, it looks good on paper. 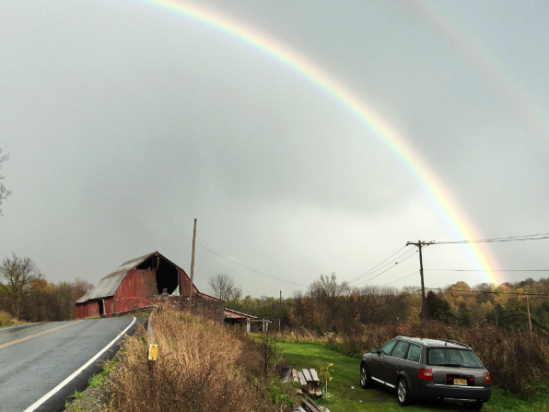 With so many projects on the docket, it’s days like these when the rainbows come out after the rain that give me pause, take time to breath deep and appreciate this handmade life.

The funny thing about farm renovations on an old homestead is that, like weeds, they keep popping up all over the place after you think they’re done for the season.

So I’ll do what I can each day while I am the steward of this land in the vale of the Boquet River.