We had to start somewhere, so we decided to start with the garage. It’s a quaint and beautiful structure built in the 1950’s that many folks pass by on their way into downtown Willsboro. It’s pretty full of assorted stuff (not necessarily junk) and the clean up has begun. As someone who has worked in renovating old houses, one of things that is enjoyable is playing detective as you discover relics of the past. Some may have value and some are just cool. The garage used to be a personal auto shop. There was a bunch of scrap metal along with various car parts surrounding a sturdy homemade workbench. Swallow nests and droppings were fairly abundant in some areas making it a dusty affair to collect into garbage bags.

We’ve given a heap of thought about what the garage could become and we’d like it to be a friendly farm store with a storage space upstairs. Up this ladder is a surprisingly large floor with plenty of headroom that measures about 12′ x 28′. It could easily be used as a studio. The current residents up there now are mud wasp nests and some spare tires from the auto days. The garage doors are tall and wide for trucks to pull in and out. It’s apparent that the windows were fairly popular for target practice as the building fell into disuse over the years. We’ve since covered them up with plastic as a temporary solution until we decide what to do for an entrance and a layout overall. 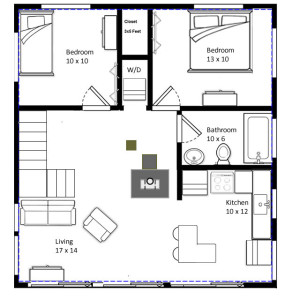 I played with the layout a bit when we were thinking more about living there as the garage actually would make for a cozy home if it wasn’t so close to the road. This brought us to the conclusion that its location is best suited for retail. On the West side of the garage is a large patch of level ground which would make a good parking area for at least a half-dozen cars. In front of the parking area could be where I build the bread oven and a structure to house it in. On the East of the garage (farm store) is where we’re thinking would be a good home site.

Even though we started with cleaning up the garage first, I’m making a conscious effort to plan the farmstead to be efficient. Finding ways we can reduce distances between buildings, reduce labor needed for logistics and create buildings that are multi-functional will make life easier down the road.